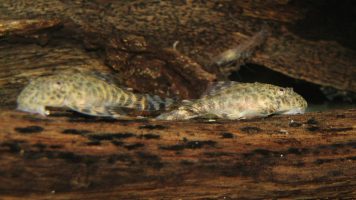 today I would like to introduce you in three articles of the current issue of Aquaristik-Fachmagazin:

Ingo writes that for the animal keepers is often not sufficient only reproduce their animals, therefore they also try repeatedly to exploit the genetic potential. These breeding forms are mostly based on gene mutations. These are even likely to occur quite often, but are obscured by dominant features or lethal factors. For the breeders then only the mutations are interesting, which lead to obvious peculiarities, for example extended fins. This crystallized property must then continue to be inherited dominant in the chosen strain and have no (noticeable) impact on life expectancy.

In aquaristics, there the most common of such deviations should be albinism. Such animals also occur in nature. However, they have a very poor life expectancy there. Bright animals are much easier to spot by predators.

A mutant of Corydoras sp. “C 150” which was hatched in England is a special feature. It should be the only mutant, which changes the pattern.

Color modifications are another aspect. However, these should not be genetically stable. Here it can happen that these animals dye back under suitable conditions. Ingo calls as a well-known example Parancistrus aurantiacus.

Ingo further mentions the somatic mutations. These are only small-scale changes and play no role in breeding.

Some fish have also become interesting as breeding forms for the aquarium: Clarias batrachus or Synodontis nigrita.

In the aquarium you could get along without these breeding forms. Ingo sees the border where the vitality of the animals is negatively affected: so for example in the different forms of veil (like the veil forms of the common bristenlose) or veil forms of different Corydoras: Corydoras aeneus, Corydoras paleatus and Corydoras panda.

Due to their popularity, South American Loricariidae and Corydras are the most frequently bred fishes. So we know various albinotic forms.

Ingo notes that the term “albino” is not used consistently. Therefore, it always comes back to misunderstandings.

As Ingo writes, there are three types of chromatophores (pigment cells), which are responsible for the colored appearance of fishes. These are melanophores, xanthophores and iridophores. Color anomalies occur when an enzyme is blocked in the synthesis of the essential amino acid phenylalanine. The phenylalanine should be closely linked to the melanin metabolism. While phenylalanine can somehow be synthesized, enzyme damages lead to albinism.

As you know, the origin of the common bristenlose cannot be clarified. In many South-South American rivers you can find similar species. When you take a closer look, they differ significantly. Ingo states, therefore, that we are dealing here with multi-hybrids. This results in differences between the form(s) of these plecos.

Since common bristenlose and their breeding forms are relatively easy to keep and to breed, they are a popular starting point for “special breeds”. Over the years, various forms of the common bristenlose have emerged, as a combination of hybridization and selection. Some of these forms seem to have disappeared again. Likewise, the forms known today will not be the last new ones.