I would like to present you three articles of the current edition of the Amazonas:

Nathan K. Lujan writes over an excursion in Janary 2016. Destination of the excursion was the Rio Ireng in the Guyana-Shild, on the border between Guyana and Brazil.
Of particular importance for him was the search for Lithoxus bovallii.
On this excursion they also discovered a new species of genus Neblinichthys (Neblinichthys sp. “Guyana”). Today we know 6 escribed especies oft this genus. As Nathan writes, it is believed that the rise of the Guyana-Shild about 35 to 5 million years ago caused the split of the genus Neblinichthys in different especies.

The Guyana-Shild certainly has a lot of potential for further excursions and researches. (For example today we don´t know, because we have the same species in upper Río Ventuari and in upper Río Caura, but this species never was been found in the Río Orinoco.

Hans could reproduce Corydoras sp. “CW 16”. These species lives with Corydoras weitzmani in rainforest streams of Peru. For the reproduction the quality of the water had a high importance. Therefore he use rain water and made often changes of water. The number of hatched fishes is highly dependent from the quality of water. 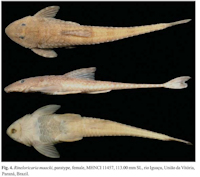