In the spring of 2006, we acquired from different breeders small groups Hypancistrus zebra in a size of about 4 to 6 cm. Today I would like to tell about our experience with these plecos. 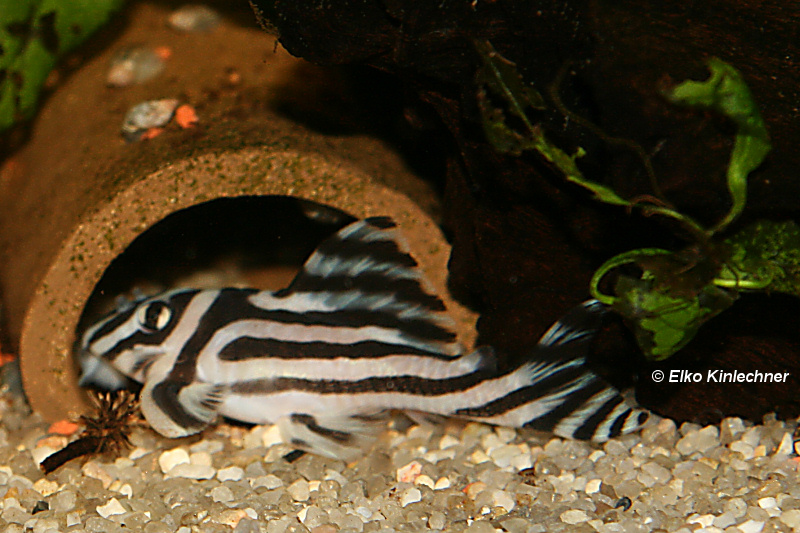 In 1991 the genus Hypancistrus was established by Isbrücker and Nijssen. They described this genus with reference to the type species Hypancistrus zebra. [1]
“Hyp” – derived from the Greek hypo (under) indicates the reduced dentition of this plecos. “Ancistrus” was derived from the tribe Ancistrini (Kner, 1853). These plecos can distinguish by the odontoides on the gill cover (often called as Interopercular-odontoides). 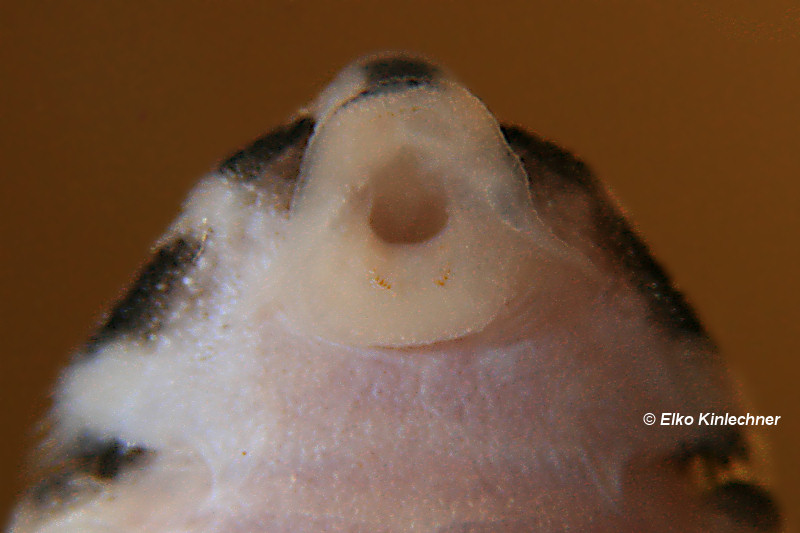 The species was previously presented in the DATZ 9/89 and received the L-number “L 46”. Later, it was still a variant of the species presented in the DATZ 6/92 as “L 98”. “L 173” is often mentioned in connection with Hypancistrus zebra. Here is the status of this species, whether it is a variant of H. zebra or a distinct species, not fully understood. As the once presented as “L 173” animal is no longer available. Therefore, the status of “L173” will no longer be sure to clarify. [2]

The species originates from the Rio Xingu, near the town of Altamira, in the Brazilian state of Para. The Rio Xingu is about 2100 km long river with clear water. That flows through the Amazon basin from the south and empties into the Amazon. [3] For several years their habitat near Altamira is threatened by the construction of the dam at Belo Monte. It was recently announced that now it also wants to build the largest gold mine in Brazil there.

As with other Hypancistrus animal husbandry is very simple. Substantially this species need clean and warm water, which is rich in oxygen. Every week we change the water to about
30 – 50 %. When changing the water we use tap water and water without salt in roughly equal proportions. We keep the animals about the following water values: 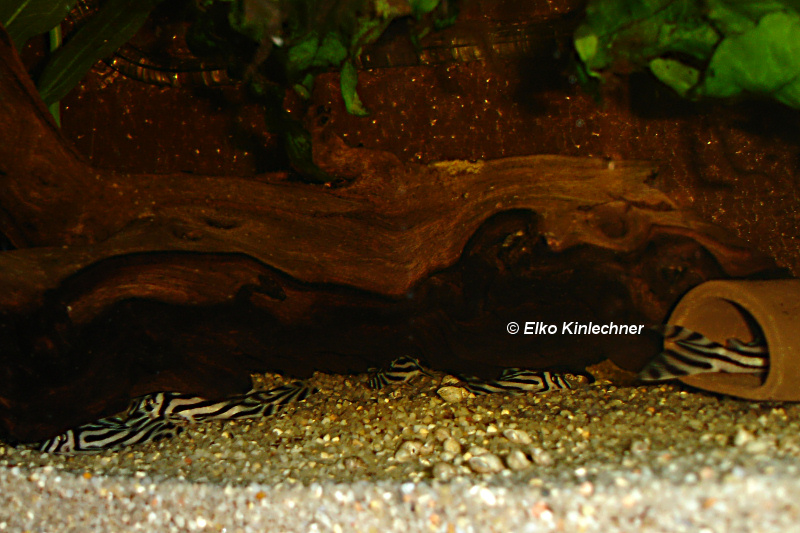 n this acuarium there are many pleco-caves, open on one side, slate tiles to build floors and roots of Mopani and from the moor. For planting Anubias barteri var. nana are tied up to the roots.

We can distinguish the sexes when the plecos have a size greater then 6 cm. Males have:

It should be noted that you must form an overall impression against the criteria. It is usually inadequate to try to fix the determination of the sexes in only one or two criteria. 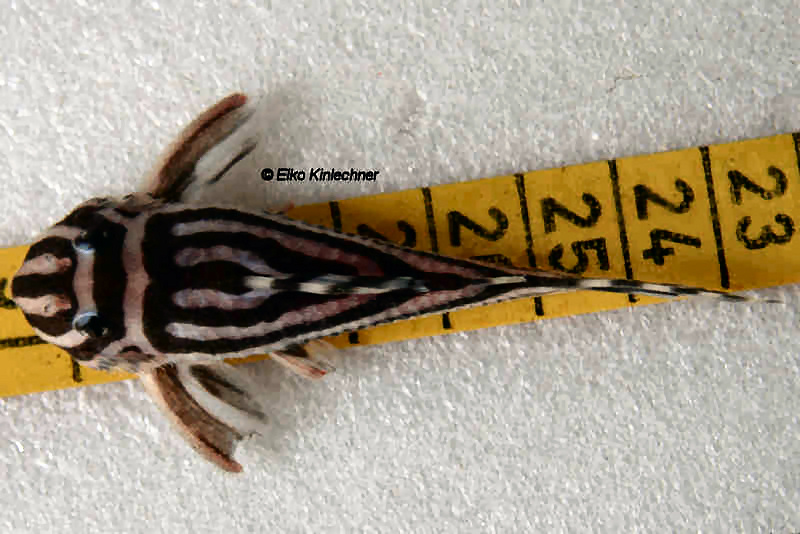 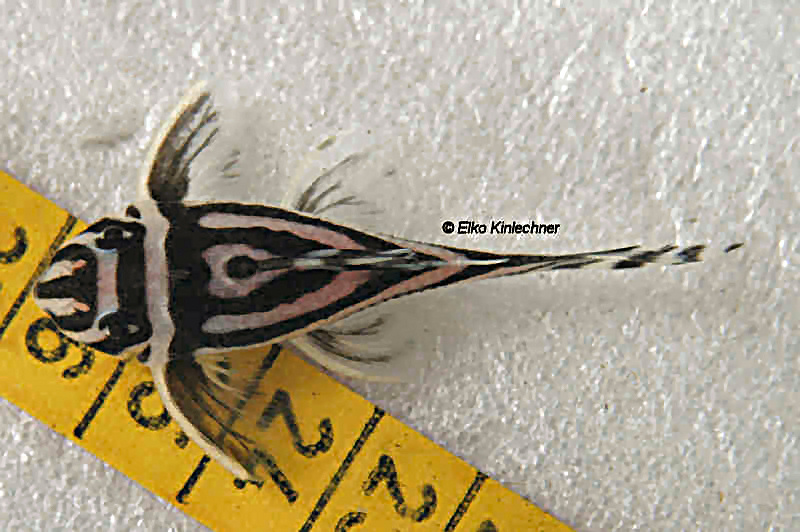 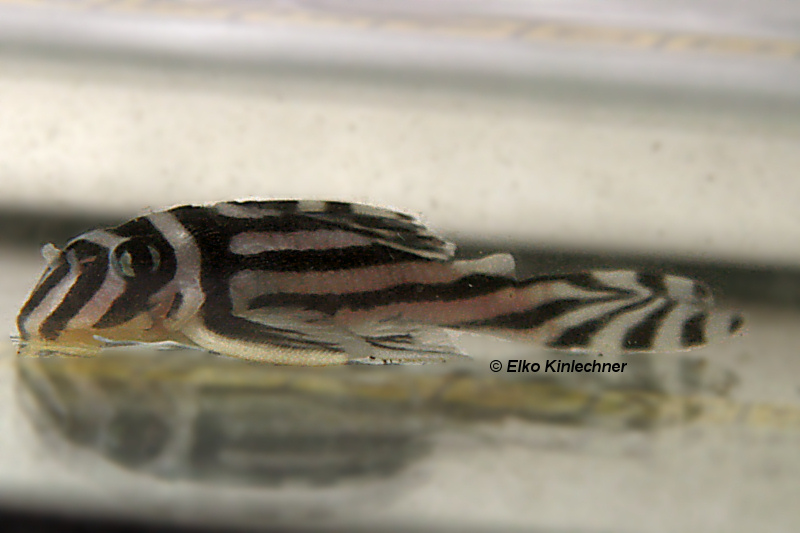 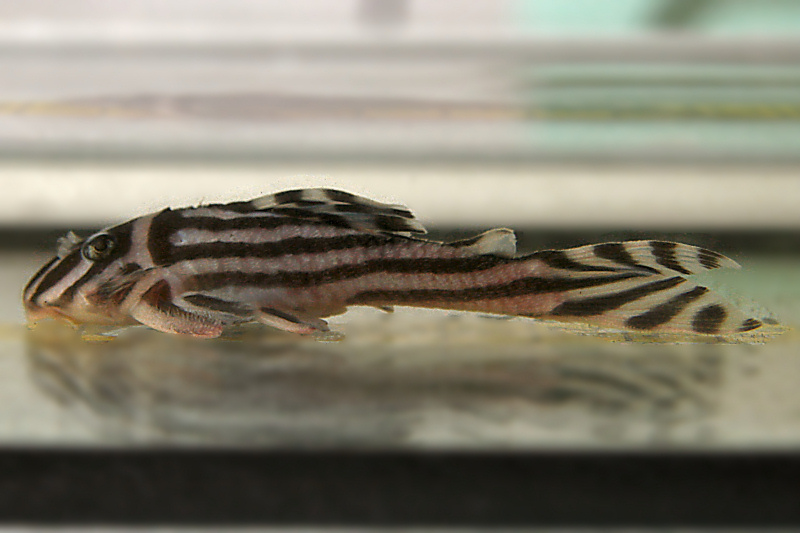 The reproduction of Hypancistrus zebra is not difficult. Clean, warm and rich in oxygen water is important. The brood operates the male. The clutch sizes are relatively small. In most cases, there are 5-15 eggs. In the DATZ one times was reported a clutch size of 28 eggs. This seems to me to be the exception. In our aquarium the plecos have multiplied with the following water values:: 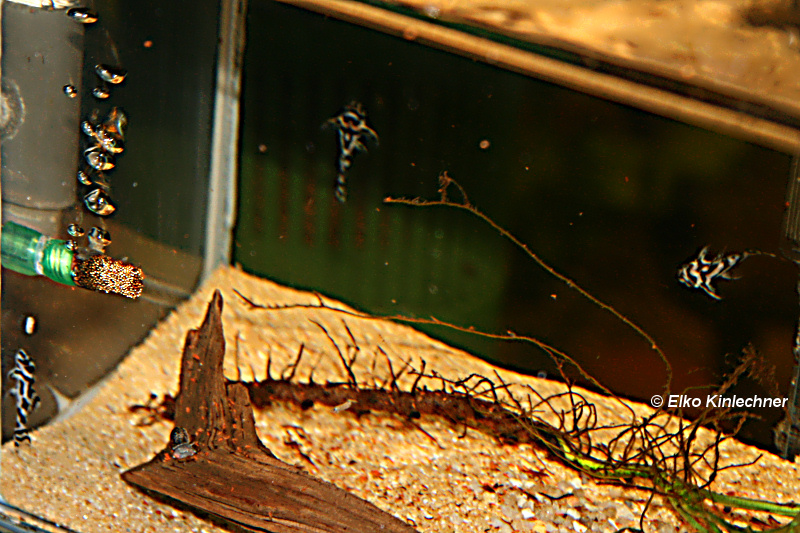 The bottom of the suspension, we cover it with a thin layer of sand. This prevents especially bacteria cultures from the ground. In our opinion, these may be responsible for the deformation of the head. Next we put in the suspension box a small piece of root, if necessary, an off-shoot of plants and a leaf of Bengal almond (Terminalia catappa) as hiding places. The leaf also acts as a disinfectant.

The rearing is relatively simple. In the first weeks, the fry’s get alternately Cyclops Eeze and JBL NovoTom. From about the 3rd week we feed then DuplaRin S and M. 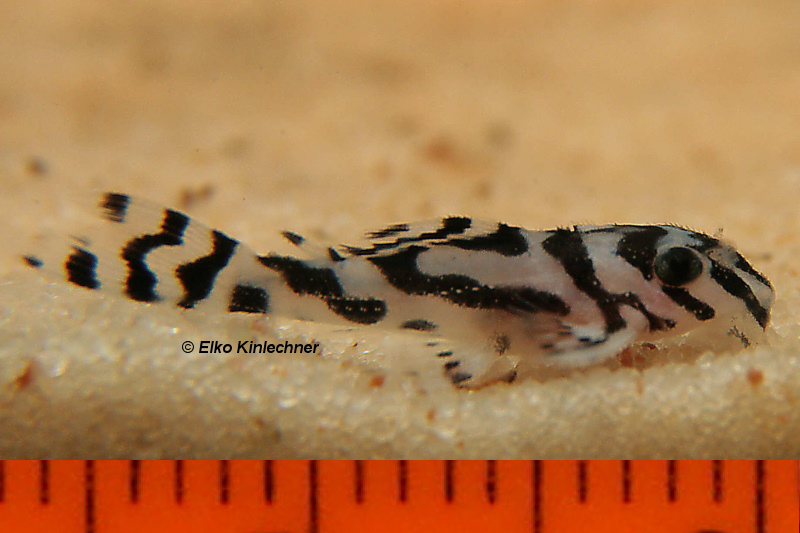 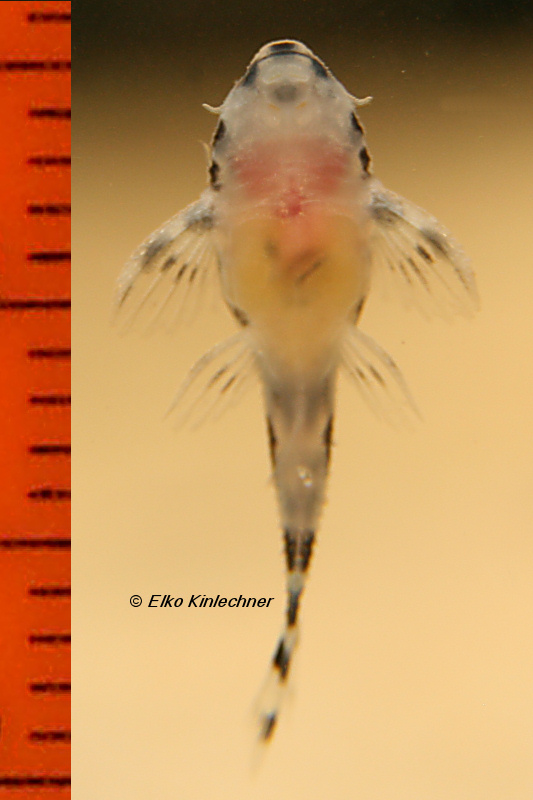 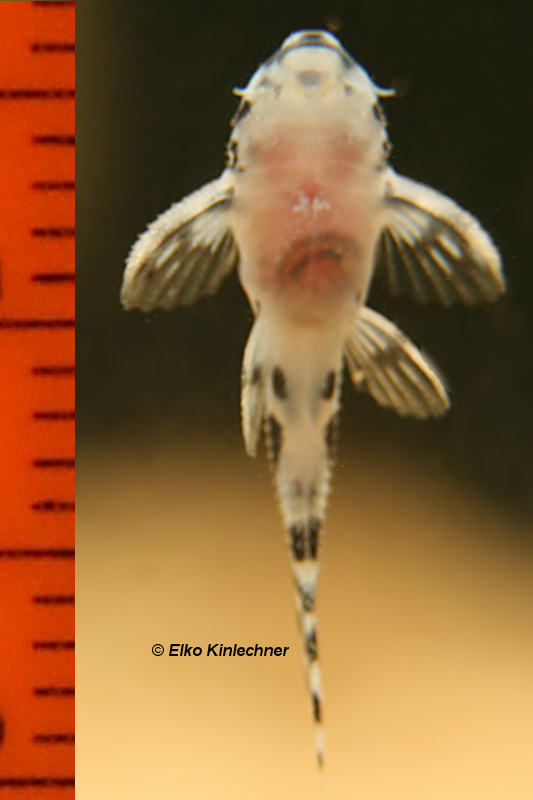 Hypancistrus zebra,
after 13 days we can see on the first spin of pectorale odontodes 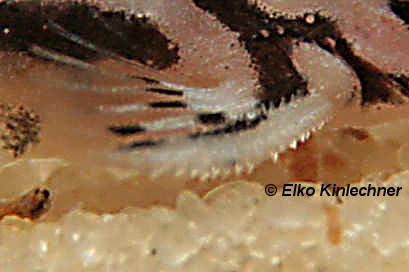 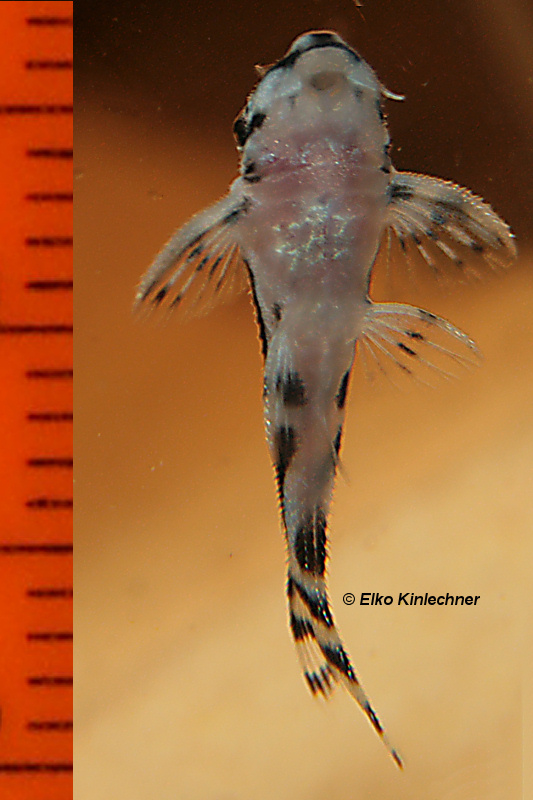 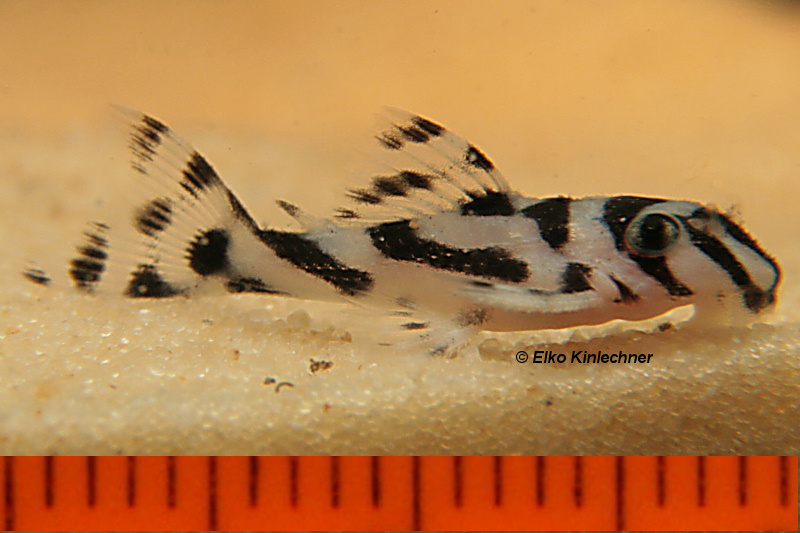 In December 2004, was published for conservation reasons, a list that should regulate what fish can be exported from Brazil. [4] In particular, the extremely popular Zebra catfish were not allowed to be carried out legally, we have experienced here in Europe. Meanwhile, a new positive list is published, which controls the export from Brazil. In addition to Hypancistrus zebra many other plecos are now excluded from the legal export. [5] In parallel, the IBAMA (Brazilian Institute of Environment and Renewable Resources) has tightened her export controls. Even attempts to export not allow L-numbers from Brazil leads to serious penalties. [6, 7] On the other hand a gigantic dam on the Rio Xingu takes more threatening moves. So writes Ingo Seidel: „One can well imagine how the transformation of a very fast flowing, oxygen-rich section of the river to standing water is expected to affect the continued existence of these highly specialized species. It means all probability certain death, and because of the export ban it will not change anything. [8, S. 20]

At least a small ray of hope comes from Brazil. The Secretary of State for Fisheries and Aquaculture of the Brazilian state of Pará (Sépaq – Secretária de Estado de Pesca e Aquicultura) will support the ornamental fish trade. [9] In this context, two projects are planned:

[10] On the basis of the export ban Hypancistrus zebra applies a special interest in the Europe.

Hypancistrus zebra is certainly the most popular Loricariids and has in this way after its first introduction a significant proportion of then erupted L-Numbers boom. The relatively high prices for Hypancistrus zebra result primarily due to the high demand and the relatively small clutch sizes. Of course, the Brazilian export ban will also have some part in it. But you should always remember that you cannot distinguish wild and captive-bred.
Keeping and breeding is relatively simple.
In my opinion Hypancistrus zebra became “problem catfish” only through the combination of “wants” and price: Many beginners in the aquarium hobby understandably want just these catfish. Larger aquarium errors of the owner are not due to inexperience and then the screaming is large. Because a catfish, which cost just spent 5 EUR, no one makes great speeches, unlike in a catfish for which you have paid around 100 EUR. This then also hurts the wallet.

These can actually be wild catches. Smugglers usually bring these species from Brazil to Colombia or Peru. Once these animals are out of Brazil, they can be freely traded without any problems.

The IBAMA, the Brazilian police, the Brazilian customs, etc., always report on the picking up of ornamental fish smugglers. Anyone who knows the open boundaries (f.e. Brasilien, Kolumbien and Peru knows that picking it up can only be exceptions. Most likely, the intercepted smugglers have been too stupid, they have overdone it or they had a monstrous bad luck.
Because of the poverty of many Brazilian residents, some will continue to be forced, including to earn a living by smuggling ornamental fish.

With a Hypancistrus zebra wild catch offered outside of Brazil you will certainly not find a button in the ear that could clearly identify him as wild catch. Because the wild catch hype there are also many scammers. It is almost impossible to prove whether the animals on offer are real wild catches or just captive offsprings.

The species is grown in large quantities in Southeast Asia and sold worldwide.
Breeding projects are also known from Peru. However, nothing is known to me about their success.