today I would like to introduce you in four articles of the current issue of magazine Amazonas (September/October 2017):

The history of the „Red Whiptails“ begins with the information that Zoologica, the only importer in the former GDR, received three red whiptails (Rineloricaria sp. “Rot”). The exact origin and the exact affiliation could not be defined at this time.

In November 2015 the Company Aquarium Glaser imported a shipment of Rineloricaria lanceolata from the near of Asunción (Paraguay). Among them were two special males: one black and the other red. The black male died soon. The red male and a female from this shipment have increased. There frys have different shades from orange to orange brown.

As with Corydoras sp. CW23 „Rot“ we can see by the color of the scrim what color the frys will have.

There was no special stimulation to reproduce. After 2 unsuccessful attempts by the male, on the third time Jacqueline took the eggs on the second day and incubated these eggs. For protection against bacteria, she used gravel on the ground.

Ian Fuller travelled with a group in 2016 to the Madre de Dios in Peru. There he found a Corydoras species that received the code “CW 124” later (Corydoras sp. “CW 124”). The transport to England survived only one Corydoras because these species perforated the bags with their pectoral fin ray. Although the bags were already, double.

In autumn, Ian Fuller was able to bring more of these Corydoras to England.

He fed these fishes with Tubifex, Enchytraeen and water fleas. By frequent water changes, the Corydoras became active and spawned. The rearing seems unproblematic.

In this article there is shown the development of Luiz F.C. Tencatt to an ichthyologist.

The main point is his interest in Hypostomus, especially Hypostomus cochliodon and Hypostomus basilisko.

Luiz Tencatt emphasizes the beneficial cooperation with aquarists, which provide essential information on the reproduction and rearing. 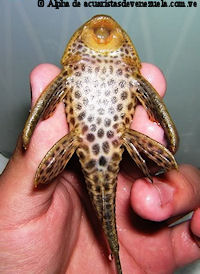