today I would like to introduce you in five articles of the current issue of magazine Amazonas (November/December 2017):

In Indonesia the company Maju Aquarium in Cibinong succeeded in the first reproduction of Pseudacanthicus sp. “Typhoon” (LDA 105). The company maintains a separate hall for the conservation breeding of growing cactus catfishes. The keeping takes place in 4,000-liter tanks. Every week they change 50% water.

They could picked out four safe females from more as 40 large Pseudacanthicus sp. „Typhoon“. Then they put two females together with one male.
On one day, inexpertly, they found a chunk of eggs in front of a cave. They were able to save 20 of the probably 500 eggs. Of these 15 larvaes hatched. 6 months later, only 2 of these animals lived. In this time, both had a size of about 6 cm.

The authors represent the classification of the genus Acestridium. They briefly talk about their way of life in nature. A particularly important part of the article is about the care of these species in the aquarium. They recommend for the keeping an aquarium from maximal 60 cm length without ground, to facilitate among other things the feeding for this species. For feeding, the authors recommend finely grated plant-based flake food / feed tablets, especially those with a high Spirulina or Chlorella content. In addition, they feed Artemia nauplii.

In addition, there are the first observations for spawning. However, successful multiplication was not yet possible.

This article is about animals of the genus Rhadinoloricaria. According to reports and own experiences of the authors, the animals are caught at a slightly greater depth – around 2 meters. Propagation has been successful in two different species (Rhadinoloricaria sp. “Río Caquetá” and Rhadinoloricaria macromystax).

This article is about Harttiella crassicauda, which originate from the area of the Nassau Mountains. Karsten writes how he discovered the species on an excursion to Suriname and was able to take home some animals.

Corydoras sp. “CW 28” belongs with about 8 cm standard length to the large Corydoras. They are from the Rio Purus and its tributaries in Brazil. Hans reports that, at the end of the flood, this species go down the rivers and uses the abundant food in floodplains. With the flooding of the floodplains, they retreat to their areas of origin. 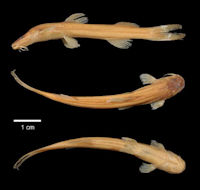 Last sample of stock lists:
11/May/2020
Catfishes of the last german stock lists