In the aquarium trade magazine June / July 2020, Ingo Seidel reports that the permission to export fish should now be based on this book in the form of a negative list.
The endangered species are listed in this Livro Vermelho (Redbook) and may not be exported.
Conversely, species not listed in this book may be exported. The previous practice of positive lists is therefore no longer applicable.

For example, Hypancistrus zebra (L 46) is listed in this book and may not be exported from Brazil in the future.
On the other hand, Parotocinclus jumbo (LDA25) is not mentioned in the book and should therefore be allowed to be exported again.

But things are not quite that simple. Leandro Melo de Sousa is currently creating a paper in which the endangered, not described species are recorded.
It can be assumed that these may not then be exported.
The best known example of this is surely Hypancistrus sp. “L 174”.

The basis for this change is that, after years of research, it has been concluded that fish are not endangered by ornamental fish. Pollution and destruction of nature have been identified as the cause of the extinction of fish species.

There is still something to add: Ingo also brakes to great enthusiasm, because due to Corona there are currently hardly any exports from Brazil.

Endangered catfishes in Brazil
There should still be a few exceptions because the planned dam construction on Rio Tapajós was already taken into account in the assessment. This dam should (hopefully in principle) not be built. 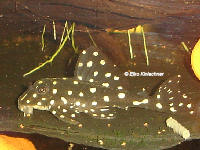