How it all started

In the mid-80s, more and more unknown plecos were imported from South America. In the trade they were with the most different names. It was almost impossible to buy two plecos of one species from different dealers.

In 1988 Rainer Stawikowski (magazine DATZ), Arthur Werner (company Transfisch Munich) and Dr. Ulrich Schliewen (Zoologische Staatssammlungen München) decided to give the undescribed or unknown plecos from (at that time:) tribes Ancistrini and Hypostomini / (today:) subfamily Hypostominae a serial number. This number should correspond to the order of presentations of this plecos in the magazine DATZ.

They used the letter “L” in front of the number to mark that it is a number of a Loricariidae.
The use of numbering systems had previously been practiced in other fish families.

The history of L-numbers began.

Anyone, who has looked around a bit, will have already discovered plecos with LDA-numbers. The LDA-numbers are an independent numbering of the magazin „Das Aquarium“: LDA stands for „Loricariidae Das Aquarium“. However, this numbering does not take into account the fishing location.

The LDA-numbers started in the issue 11/1992 of “Das Aquarium” with a tiger pleco. This pleco got the number LDA 1. Later, in the magazine DATZ 7/1994 this pleco was published with the number L 169. At this time, one saw this catfish still near the genus Panaque. Today they are classified in the separate genus Panaqolus. Today we know the presented pleco as Panaqolus sp. “LDA 1/L 169”. 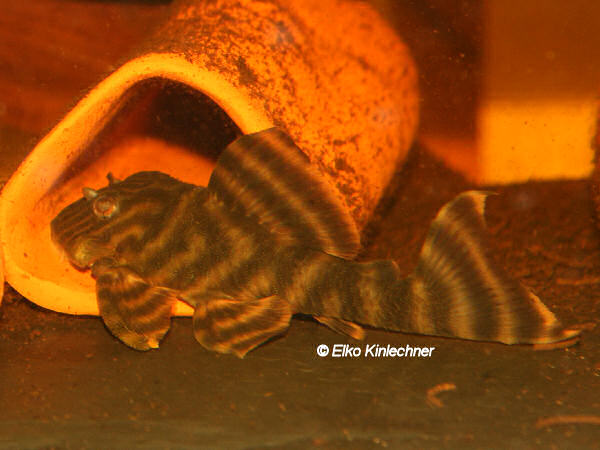 Unfortunately, the magazines could not agree on a common approach for the numbering of the plecos. Therefore, the LDA-numbers have occasionally contributed to confusion: we have plecos with L-number and LDA-number, only with one of these and without a number.

At the end of 2005, the magazine “Das Aquarium” was discontinued. We assumed that the LDA-numbers have come to an end. The last LDA-number should have Neoplecostomus sp. „LDA 102“.

Exceptions prove the rule. There are a few L-numbers in L-numbers in other subfamilies as Hypostominae. For example:

Several L-numbers for only one species? 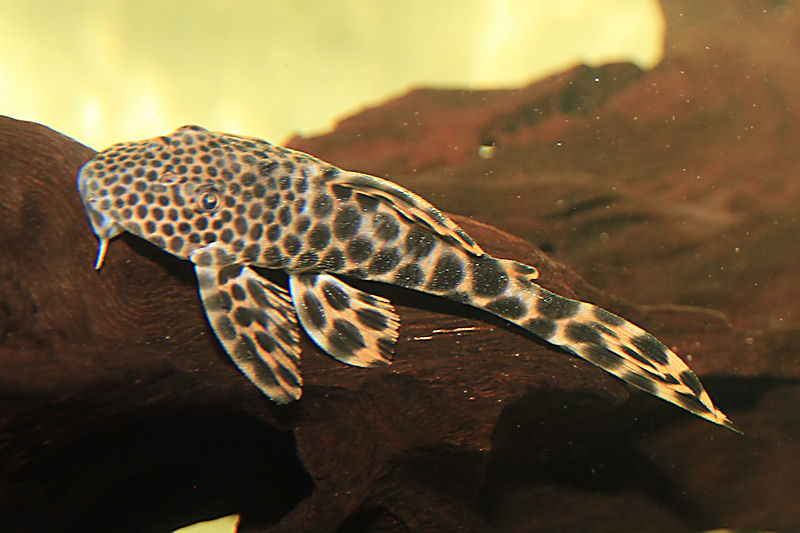 Many plecos change their appearance during their lifetime. Often it has not been clear whether a new import is a new color variant or a new species. Therefore, it happened that few plecos of the same species from the same fishing location get more as one L-number.

For example Ancistomus feldbergae. This pleco has the L-numbers L 12 and L13, although both species were caught together in the same habitat. After a long observation, it became clear that they had to be the same species.

In this respect, we refer the not yet scientifically described plecos with the genus name at first, followed by “sp.” (for species), possibly followed by a further additive for the identification.

Who do not know the L46? This pleco got this L-number in the issue DATZ 9/1989 of magazine DATZ. In 1991 Isbrücker and Nijssen published the scientific description of Hypancistrus zebra. After that, the L-number should (must) be omitted. 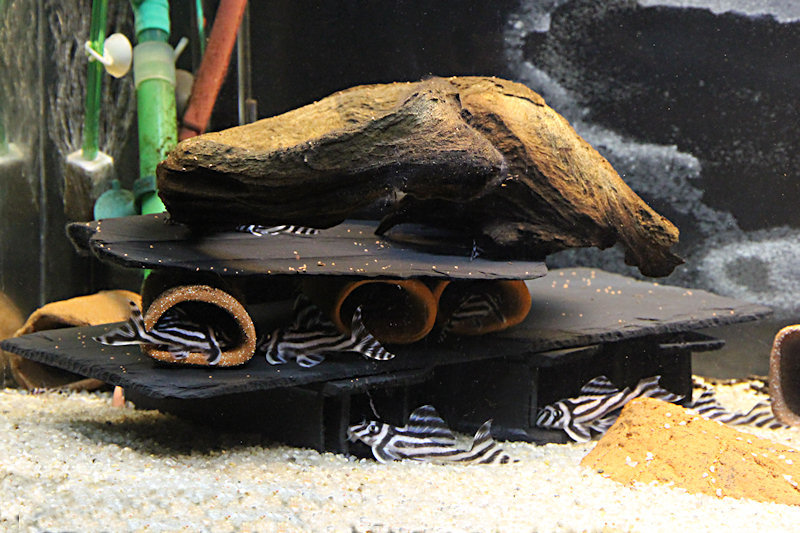 However, who is bothering to say Hypancistrus zebra every time? L46 is much shorter and easier. Nevertheless, everyone knows which pleco is meant. It gets even worse with scientific names that hardly anyone can remember. We see once again: nothing lasts longer than a provisional does.

Originally, it was intended to number the plecos in the order of their presentation in the magazine DATZ. Occasionally there were also deliberate and less wanted deviations.

In the magazine DATZ 8/1993 two plecos got the L-number L 136 completed with the letters “a” and “b” because both plecos are very similar to each other. These plecos differ in size and quantity of points. Later it became obvious that this must be the same species, because L136a has frys which look like L136b and L 136b has frys which look like L 136a. We still call these species Hypancistrus sp. “L 136”.

In July 1994, the DATZ introduced Hypancistrus sp. “L 136c”. This is also a gray/dark gray pleco with white points, similar to L 136a and L 136b. However, it can be assumed that it will not be the same species. 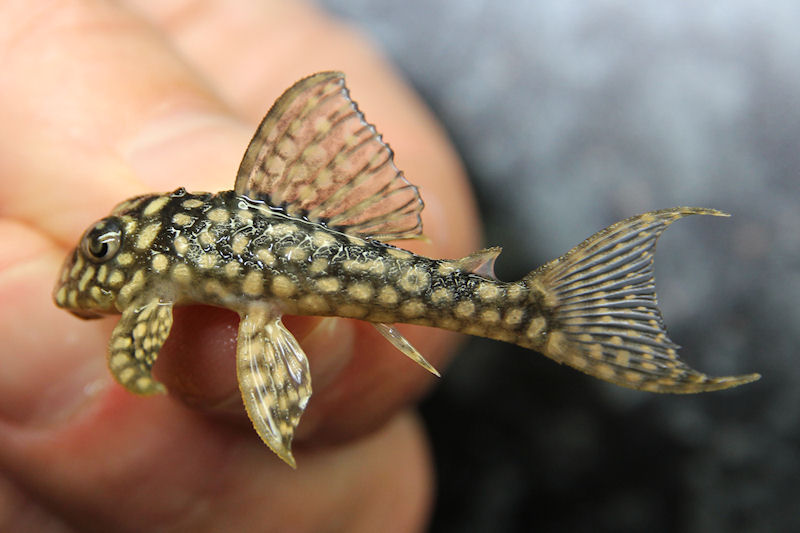 Problems with the assignment of the L-numbers

With the fishing location

As we already know, it was foreseen that with an L-numbers also the fishing place is called. Sometimes this was not known because the pleco was found on a market or in an import. For example, this applies to Hypancistrus cf. inspector “L 102” and Panaqolus cf maccus. “L 104”.

For special-looking catfish, the catchers have also reluctantly betrayed the fishing location to protect their source. Here was sometimes called a fishing place, which later turned out to be wrong or in which there are still serious doubts. Noteworthy here are Hypancistrus sp. “L 236” and Pseudacanthicus sp. “L 282”.

Later this shortcoming caused discussions repeatedly when it came to assigning the L-number to a specific species.

Sometimes DATZ editorial staff carelessly gave a L-numbers twice for different species. It also happened that the company Transfish had already offered plecos with a L-number that had not been published yet. In these cases, most of the later L-numbers were corrected. For example, Pseudolithoxus anthrax was first introduced as L 239 and later changed to L 235.

From time to time, L-numbers were temporarily omitted in order to get a special L-number to particularly conspicuous species. Thus, they initially omitted the L 442 to L 449 for Hypancistrus sp. “L 450”. These gaps were closed later. 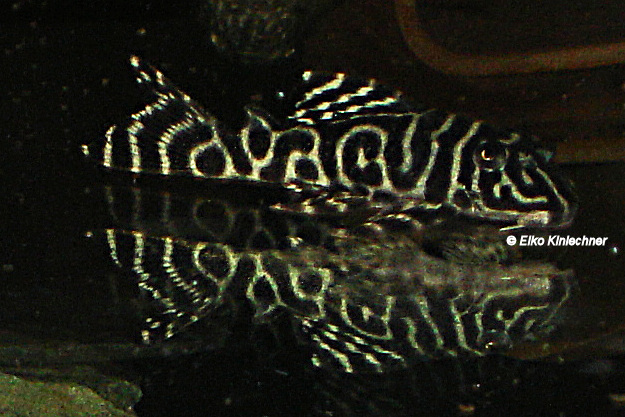 Hypancistrus sp. “L 450
(A comparison with the picture in the DATZ 7/2010 is interesting. In the photo her, that would have to be the same pleco a few weeks later.)

One cannot rely on just that the order of the L-numbers really corresponds to their publication in the DATZ.

The assignment of L-numbers over time

The real aquarium hobby thrives on the urge to research and this includes always new fish species to elicit their secrets. The distance to potentially new fishing areas increased over time. The relation between costs and benefits of commercial fishing seems increasingly uneconomic.

In addition, there are legal restrictions. In 1992 the first pleco, Hypancistrus zebra stands on the positive list for ornamental fishes in Brazil. However, this positive list was implemented only sporadically.

At the end of 2004, Hypancistrus zebra was added to the list of endangered species. These restrictions had no influence on the assignment of the L-numbers. First with the positive list in 2012 came to extensive export bans for various plecos from Brazil. An effect is that many ornamental fishermen had to look for other jobs. Private fish excursions to Brazil became rarely.

For these reasons, significantly fewer L-numbers were awarded in the last years. Occasionally there were intermediate spurts when aquarists presented fishes from their fishing trips or fishes that had been well kept in Germany for a long time. Today, at the beginning of 2018, we reached the L 502 with a Peckoltia sp. from Suriname.

New L-numbers in the years

The L-numbers became internationally important soon a short time after their introduction.

Rainer Stawikowski reported at an event in 2009: A short time after the publication of the first L-numbers, a well-known dealer in Brazil showed him a list that should show that Brazil has now an ordinary list with the known plecos. The dealer was obviously unaware that the list resulted from the magazine DATZ, whose editor-in-chief is Rainer Stawikowsiki.

If a pleco is new scientific described, the question arises: is there already an L number for the species? It is very helpful if the corresponding L-number(s) was already mentioned in the description. Thus, a few weeks ago Chamon & Costa e Silva described a new species in “Pseudacanthicus major: description of one of the largest known Loricariidae (Hypostominae: Ancistrini), a species from rio Tocantins basin, Brazil”. The authors explicitly refer to L 186“.

The L-numbers in the trade

In particular, in the trade, the L-numbers have proven. After the introduction of the L-numbers, it was much easier to buy certain pleco, if you knew what you already had in your aquarium.

If we consider the financial aspect, it can be seen that plecos with L-number can be sold much better and sometimes more expensive than described plecos without L-number or only with the addition of the fishing location. So is a Hypancistrus sp. “L 66” for the trade a “standard catfish”, while Hypancistrus sp. “Gurupa”, on the other hand, for no apparent reason, is a storekeeper.

It was particularly critical when it became clear that catfish with certain L-numbers preferred to buy and could be traded with above-average prices. Occasionally, animals were then also decommissioned. Then a very nice Hypancistrus sp. „L 333“ suddenly became a Hypancistrus sp. „L 236“.

Another problem is, in the presentation in the DATZ we can find for several plecos the photo of the most beautiful or rather conspicuous instead of a representative pleco of these species. This unusual pleco then did not correspond to the usual color and / or drawing. Sometimes whole import shipments were searched for such exceptions and then none was found. An example here is Hypancistrus cf. debilittera “L 340”, which is also referred as the red zebra pleco due to the DATZ publication 9/2003. So strong, if ever colored plecos of this species were the absolute exception.

The export situation in Brazil not will change. It is easier to protect fishes from nature-loving aquarists instead of dams like Belo Monte. Most likely other South American countries will follow.

The general interest in aquaristics and therefore in catfishes has significantly diminished during the last years.

The circulation numbers of the magazine DATZ have declined during the last years. The chief editor of DATZ, Rainer Stawikowski is nearing retirement. Who knows what will become of the DATZ.

I think there will always be some L-numbers again – but they will not be much anymore.